As I’ve mentioned before, I have a tremendous love for Warsaw, and I constantly find it a city worthy of returning to, year after year after year. In the past several months, while browsing through instagram, I found posts about a unique place within the Old Town of Warsaw: Canon Square.

It’s a little square located off of the Old Town, with two ways to get there: around the Royal Castle, past the Pizza hut, there is what looks to be a dead end, but really isn’t and it takes you directly into the square.  The other way is to walk to the old town and once you make it to the square, walk to the right until you see a street there to your right.  You walk down that street until you reach the square.

It’s a quiet square, with people’s homes, and not many tourists in the location. Not many people know it, so as I’ve figured out, it’s a perfect place to escape the crowds but still be within the walls of the old city that I love so much.

In that Square, there’s a little wishing bell…well really, a big one. It was supposedly made by the same architect who made the the statue of Zygmunt I, who stands atop the column by the Royal Castle on the Castle Square. It’s a massive bronze bell made in or about 1646.  According to local lore, there is a love legend surrounding the bell as tragic as that story of Romeo and Juliet. And also there is the belief that if you circle the bell a certain amount of times (some variations include hopping on one foot, or one foot against the bell), your wish will come true. 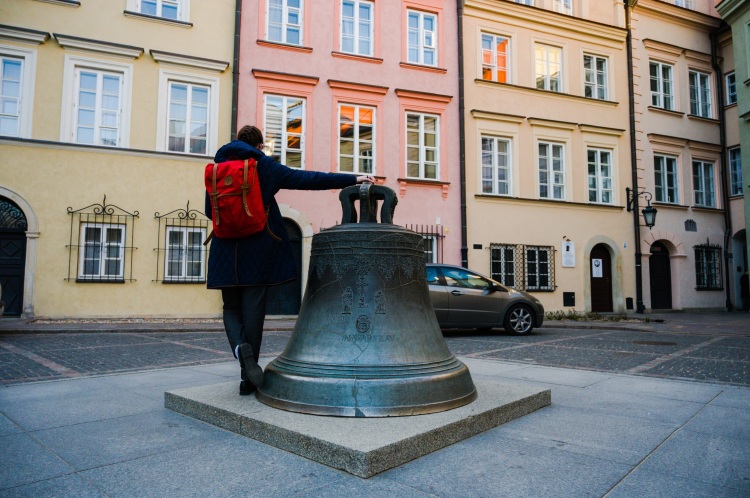 Because of this, I took one afternoon after my job and stopped by to have some fun photographing the area and myself with my camera and tripod. It was past 5pm, on a wintry, windy March day, and even though it was prime time for people to return home, there were very few passersby through Cannon Square.  Of course, the few people that did pass through, gave me weird looks because what sane person takes photos of themselves without a coat, hat, and gloves in the middle of winter?

Either way, Cannon Square made me fall in love with Warsaw just a little bit more, and it’s definitely a place you’d want to visit if you want to escape the crowds but still be in the old town.