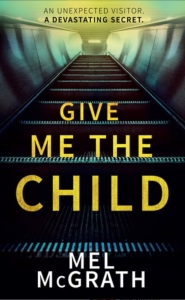 What it’s About: One morning, the police ring the doorbell to Cat and Tom Walsh’s home, bringing over Tom’s love child, Ruby Winters. Ruby’s mother had passed away from carbon monoxide due to a faulty boiler in their apartment that night, while the girl miraculously survived. With Ruby’s arrival, strange things begin to happen around the house–a hamster goes missing, the iPad of the next-door neighbor disappears, Freya (Cat and Tom’s daughter) seems to be getting bumps and bruises that she explains away as falling down. Every time that Cat brings up her concerns to Tom, Tom tells her that she’s just being paranoid.

But is she? Cat’s experience as a child psychologist tells her that something is wrong.

Her paranoia results in her hitting Ruby, which then causes Tom to lock her in his office and to call the police. He claims that Cat has had another mental breakdown, similar to one that happened during her pregnancy. Cat escapes and goes on the run, finding refuge in hotels on the other side of London, while riots break out across her part of the city, over the deaths of children. While on the run, she begins to put the pieces of what happened to Ruby’s mother, and what has been going on during the summer with Ruby and Freya. When Freya ends up in the hospital, Cat sneaks in and Freya tells her that Ruby has been hurting her, such as trying to hold her underwater until she passed out. A little while later, Freya disappears and Ruby’s story is that ‘a boy they played with took her’; however, Ruby is unable to tell the Police anything about the boy.

Cat puts two and two together–the boy that she has been attempting to treat in her clinic is the one who Ruby was referring to, as he lives close to the park and near Cat’s home. Joshua Barron was a psychopath, and has had a history of attempting to hurt others, including a kitten. She goes to his home, and follows Joshua from his home to the train station, where she finds Freya tied up in front of an oncoming train. She manages to save her daughter, but instead Joshua kills himself by putting himself in the path of the oncoming train.

In the end, Cat was able to get her daughter back, while her husband disappeared after she gave him the choice. She took advantage of him going on the run to report the murder of Ruby’s mother to the police with the eyewitnesses she had met during her time on the run–Gloria, Ruby’s next door neighbor, and Ani, the man who fixed the boiler and could attest to Tom being in the apartment and showing Ruby how to turn off the boiler so that it would poison her mother. As a result, Tom was later found and arrested, and Ruby was taken out of the house, and placed into Foster care, in order to protect Freya. Sal, Cat’s sister, who had been there with them through the whole ordeal and helped protect Freya, took Ruby in, in order to keep the girls together.

My Verdict: It was an entertaining read, and the author revealed just enough information –via clues–for us to put together parts and pieces of the story. One thing that really stood out to me was how Tom really played an innocent party from the beginning, even though through the book we find out that he had played a hand in the death of Ruby’s mother, and that he had known about her for a lot longer than he admitted to Cat. It goes to show just how little we really know our friends, families, lovers and partners, as those who wish to keep things from us will do that.

Personally, this book wasn’t a first choice of a read for me. I got it as part of the first reads program from Amazon, or from one of their free books programs, and put it on my list of to-read as I’m not one who gets a book without trying to read it. This is a good attempt at a psychological thriller, but honestly, it feels a lot like the Girl on a Train type story. I don’t know what it is with the psychological thriller genre, but it all seems to include a part about gaslighting the women characters, who have a drinking “problem”, in the book. This part peeves me, so it was kind of a turn off. Furthermore, there are parts of the book, where my interest in the story-line dried up because it was confusing, had nothing going on, or the relevancy to the story wasn’t clear.

If you’re into reading the same type of storyline by all means read this book, but I’m not recommending for you to take this on your next flight to a new destination, especially considering that there are tons of other books that are more interesting.